A Few Days In September 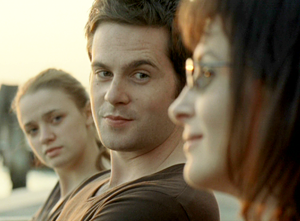 A spy discovers doing a favour for a friend leads her into unexpectedly dangerous circumstances in this dark comedy. It's been close a decade since French intelligence agent Irene (Juliette Binoche) has heard from her friend Elliot (Nick Nolte), an American CIA operative who left Europe and took up a new identity under mysterious circumstances. But one day out of the blue Irene gets a call from Elliot as he asks her to track down his daughter Orlando (Sara Forestier), currently living in the French countryside, and bring her to Paris so they can re-connect. Irene agrees, but she soon discovers Orlando has nothing good to say about her missing dad and only grudgingly agrees to pay him a visit. When they arrive in Paris, Irene and Orlando find the family reunion is bigger than they thought -- David (Tom Riley), Elliot's stepson, is also on hand, though David and Orlando mix like oil and water. As Elliot tries to juggle meetings with his two children and Irene tries to help by playing interference, Elliot is also visited by a deranged American intelligence representative, William Pound (John Turturro), who along with Elliot knows something about a possible attack on the United States, as well as a pair of shadowy moneymen (Mathieu Demy and Said Amadis) who want to know more about the plot and are willing to pay for the privilege. Quelques Jours En Septembre (aka A Few Days In September) was the first directorial credit for veteran screenwriter Santiago Amigorena. (from allmovie.com)