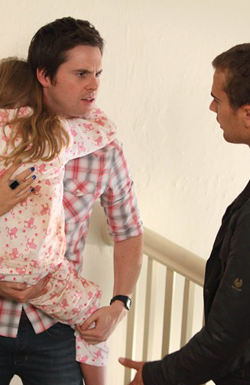 The contemporary paranormal series, written and created by Neil Jones, David Allison and Chris Parker, is set around Bedlam Heights – an apartment block converted from a pre-Victorian lunatic asylum and its inhabitants.But the conversion of Bedlam Heights awakensa darker side of the building, with former asylum spirits coming back to take back what they believe to be theirs and seek revenge on those who have wronged them – targeting one set of flat sharers in particular. The terrifying hauntings that follow reveal that sometimes when you scratch away the surface, things aren’t always what they seem.

Guest role as Rob in "Hide and Seek" Episode 4

Molly fears the worst when Ella, the girl she is babysitting, tells stories about an imaginary friend being abused. Jed tries to save Ella from a sinister child ghost, and makes a shocking discovery.

Amazon UK
Amazon US
iTunes US

Trailer on You Tube

Trailer for Tom's episode of Bedlam - brief glimpse of his shoulder at the beginning.