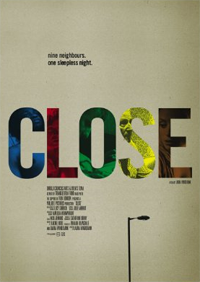 ‘Close’ is set in a block of flats in Village and Abbey Roads in Enfield. It explores the lives of people in the flats and how, without realising it, their lives affect each other. It's nearing 3am. Rob and Eric arrive home with a clatter. Before long the residents of four flats are disturbed from their sleep As sounds travel, so do we, dipping into the worlds of these neighbours. As we leave, the unassuming actions of one may threaten them all.