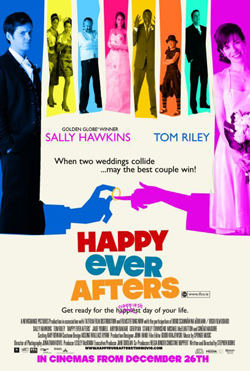 Sometimes the happiest day of all can be the most heartbreaking. Freddie (Tom Riley) and Maura (Sally Hawkins) are getting married, only not to each other. While Freddie is entering his second marriage with the neurotic Sophie (Jade Yourell), Maura's motives for marrying Wilson (Ariyon Bakare) are more for money than love.

Then, when the two wedding parties end up at the same reception venue, the house of cards looks set to collapse on the newly weds, guests and all. Maura, a feisty single mum, not only has her daughter to content with - indeed, 8 year-old Molly is increasingly suspicious as to her mother's marital intentions - but she is also threatened with eviction from her home.

Meanwhile, the well-intentioned Wilson, an African immigrant in Ireland, is being monitored by two bungling detectives, sceptical as to whether or not this marriage is the real-deal.

When Maura clashes with Sophie, she risks blowing her ruse. Increasingly paranoid about Freddie's commitment to a second marriage, Sophie goes off the rails, leaving the party and drinking herself silly with newfound friends. Freddie, meanwhile, is stuck in the middle of it all. Threatened by a suspicious in-law and forced to deal with the confrontational Maura, he thinks his life depends on his second marriage.

Can Freddie claw back his relationship with Sophie, or is he looking for love in all the wrong places? Will Maura and Wilson's cover be blown? And can Sophie find happiness beyond the contract of matrimony? The vows have only just been spoken, but the honeymoon period is over.

Written and directed by Stephen Burke, HAPPY EVER AFTERS gives a modern twist to the classic screwball comedy. With a manic mix of romance, deception, politics, sex and love, it takes the wedding movie genre to newfound heights. (synopsis from official website)

As well as that, Tom Riley as the pill-popping, perfection-seeking, close-to-a-nervous-breakdown groom of the other wedding delivers a good performance. What is remarkable is that this film exploits Hollywood’s rom-com recipe, but, instead of just copying it, the filmmakers added some important ingredients to the mix, such as actors who can act. The result is a movie that feels more like quality food than junk food. Hamburg Express