Hurts Given and Received 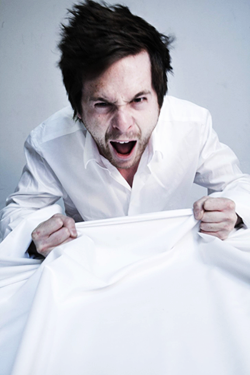 Bach, the principle character of Howard Barker’s latest play, is an arrogant driven poet, obsessed with creating the perfect masterpiece. In being single minded in pursuing this ideal, he is happy to sacrifice his friends and lovers, even convincing himself that their sacrifice is essential to his creative process. Nothing restrains his increasing ambition or cruelty, even through he fails to complete a single page of this imaginary great work. Eventually he commits a crime which results in a savage punishment, leaving him semi-paralysed and trapped in a seemingly vegetable-like stage. Now, at last, his fluency erupts and in a great outpouring of creativity he begins to write a great work, but through the medium of a child. As news of this great creativity spreads, a fevered public gathers at his door to acclaim the delivery of each new page. But Bach is sealed in solitude, the object of both adoration and contempt, a perfect symbol of the true artist’s painful exclusion from the social world.

Howard Barker’s Hurts Given and Received is a miniature epic adventure of the creative life, threaded with a dark comedy and a host of characters whose all too human weaknesses, dreams and desires we readily recognise. This startling aural collage of provocative ideas, striking images and pungent poetic language builds a compelling and thought-provoking modern allegory of the artist’s relationship with society. from here

Tom Riley is wonderful as Bach, unpleasant, but with a feral vulnerability, shaking as the women he victimises send him reeling with a flick of their skirts. And when he finally writes one, perfect page, there is the suggestion that maybe his actions were justified. Time Out

Several nominations for Off Westend Awards including Tom for best actor.