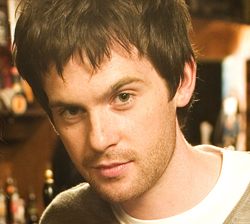 I Want Candy follows two hopeful lads from Leatherhead trying to break into the movies who stumble upon the opportunity of a lifetime. Frustrated by their arty film teacher, wannabe producer Joe and his talented but neurotic director friend Baggy head to London to sell what they know is a script made of gold. Encountering nothing but closed doors, their luck changes when an equally desperate producer is willing to throw some money at them provided they nab the star he needs. There's just one problem - he wants Candy Fiveways, the World's No 1 porn star... Against all odds they manage to secure her services, but it's not long before trouble heads their way. Making a ground breaking graduation film, complete with scenes of an adult nature, in your parents' house was never going to be easy. I WANT CANDY follows Joe and Baggy's exploits in pursuit of their dreams but dreams have a funny way of working out. from here