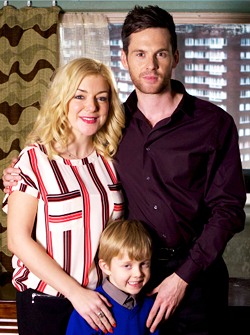 Experience the unexpected twists and turns that await all those who dare enter No. 9... Each individual story in series 2 will once again be set in a different location with completely new characters. From a sleeper car on a French train to a séance in a grand Victorian villa, and from a 17th century village to a volunteer call centre, this is an anthology of tales of the genuinely unexpected, where the ordinary and mundane rub shoulders with the extraordinary and macabre.

Christine Clarke brings a new man back to her flat from a New Year's Eve party, and immediately her life starts to unravel. Who is the terrifying stranger that keeps appearing in the flat at night?

The 12 Days of Christine features Sheridan Smith as Christine Clarke and Tom Riley as Adam.

The 12 Days of Christine