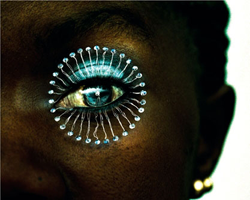 The London Eye was transformed into a spinning stage, for one night only on Tuesday 21 June 2005, by Cafe Direct, in order to raise awareness in advance of the G8 summit, of  the need for fair trade in Africa.

The giant Ferris wheel on the south bank of the Thames became a showcase for a variety of theatrical acts, comedians, musicians and other performers. Each London Eye capsule carried a maximum of 20 passengers each and each Flight 5065 performance lasted approximately 30 minutes (the time it takes for the London Eye to complete one rotation).

Cafe Direct Flight 5065 delivered 96 performances of new theatrical works, music, comedy and opinion, transformed the 32 pods of the world’s most famous landmark into an inspirational journey from darkness to light, illuminating the audience of 2000 paying guests and 150 media, and dispelling the myth that the solution to poverty is aid.

Part of a group of 4 actors performing 1 minute plays from the Royal Court Theatre in Pod 20.

“Each bubble is being commandeered by a different company or performer,” he explains. “We’re doing 20 one-minute plays and I’m in nine of them. I start rehearsing that on Tuesday, so it will be overlapping with this.” The Stage interview

Would any of Africa's poor or starving millions be grateful for such a pie-in-sky gesture? It seemed unlikely. And yet, as soon I was up-up-and-away in the presence of four young actors - two white, two black (Tom Riley, Sally Hawkins, Natasha Gordon and Clive Wedderburn) - performing a blistering set of one-minute plays penned by Royal Court writers, my cynicism evaporated.