According to this website, ITV Choice presented their show highlights in Cape Town this week, and for Tom Riley fans who are also DSTV subscribers there is some good news. Dark Heart will be shown sometime in November 2018 on ITV Choice throughout Africa. We don't yet know the UK broadcast date for the 6 part series, so it isn't clear if this is close to the UK series launch.

Across a stifling week during a London heat wave, William Wagstaffe, a workaholic whose personal life is as complex as his day job, investigates a string of horrifying murders in this crime thriller.

A TV tie-in book will be released to accompany the series. It is available to pre-order from Amazon UK. Though the book cover has not yet been revealed, "Suffer The Children" by Adam Creed will be released on October 18th 2018.

Dark Heart is mentioned in the latest Heat magazine, in a feature on this Autumn's drama highlights, and things must be getting close as according to this tweet, the score has been recorded. 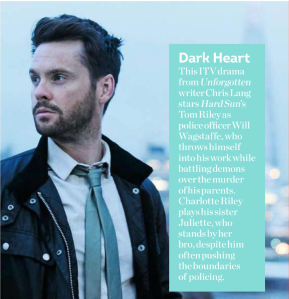