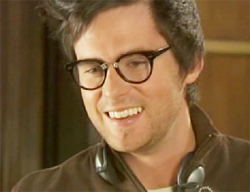 Freezing, an urban comedy about dreadful people and the twisted priorities of media land, follows the lives of a couple whose careers in the cut-throat, celebrity-driven world are sadly not as hot as they’d like to be. Forty-somethings Elizabeth and Matt are a glamorous and successful couple – or at least they would be if either of them could actually get a job. Matt has been replaced by his assistant in the publishing house where he worked for 15 years. Meanwhile, Hollywood actress Elizabeth seems to be paying the price for choosing an English husband and swapping sunny LA for suburban London. Despite being Oscar-nominated in her youth, Elizabeth is finding it hard to get an audition. Matt, in the meantime, is thrown the occasional scrap of editing by his former assistant. .

Freezing was originally a one-off comedy as part of BBC Four's Tight Spot season in February 2007, which then became the first episode of the series when it aired on BBC Two in February 2008.

Trailer (brief glimpse of Tom at the beginning)